AR&VR future and how covid 19 is changing it

Digi-Capital’s long-term virtual and augmented reality forecast is for the AR/VR market to reach around $65 billion revenue by 2024. However, the next two years are forecast to be impacted by COVID-19-related factors including (but not limited to) physical lockdowns, brick-and-mortar retail closures, essential ecommerce delivery limitations, supply chain disruption (supplier, manufacturer, distribution, wholesale, retail) and recession/depression economic impacts. Although these and many other factors have far greater implications, let’s define what we mean in relation to AR/VR:

Physical lockdowns: Much of the planet is in different stages of physical lockdown, making getting together impossible or illegal in many parts of the world. This is exacting a terrible toll, but it could turn out to be a net positive for AR/VR adoption and use. Families and friends catching up and socializing remotely, enterprise users collaborating within their own organizations and with others, and service providers carrying on business remotely where possible, are a few examples of activities where AR/VR could help. AR/VR use cases are in some ways only limited by the nature of the interactions (such as where they can be done virtually rather than physically) and the imagination of developers and users. So physical lockdowns could become a critical demand driver for AR/VR in the short to medium term.

Brick-and-mortar retail closures: The crisis has been devastating for physical retail, bringing the sector to a standstill and accelerating some long-term trends by years (if not decades). For brick-and-mortar stores that survive, their future appears to be fundamentally changed short-, medium-, and long-term. At first blush this could benefit AR/VR, but there are specific aspects which might not be as positive.

Essential ecommerce delivery limitations: Ecommerce trends appear to have been accelerated at an unprecedented rate by the crisis, which on the face of it could be positive for AR/VR. However, there are limitations being imposed on eCommerce deliveries in some categories by giants like Amazon, which could counter some of the benefits.

Supply chain disruption (supplier, manufacturer, distribution, wholesale, retail): Global supply chains across sectors have been optimized to keep customers happy and costs down. While the U.S.-China trade war had already begun to have an impact on global supply chains, the crisis has been far more significant. This is as true for AR/VR as any other industry.

Recession/depression economic impacts: Depending on which economists turn out to have been right, the world appears to be going into a recession or depression the likes of which is in living memory only for the elders in our communities. Of all the factors we’re looking at, this could prove most critical for AR/VR’s future.

Physical lockdowns could be a plus for AR/VR hardware demand, as individuals and businesses look to stay connected during the crisis. However, brick-and-mortar retail closures might be a net negative for AR/VR hardware, as mass consumers beyond early adopters might not be able (or in some cases willing) to try before they buy. Arguably, this is a bigger deal for AR/VR headsets than familiar technologies like smartphones, tablets, PCs, and consoles. It is also too early to fully understand the long-term behavioral changes around trying on something in a retail store that is worn on the face.

Essential ecommerce delivery limitations (where applicable) might be negative for AR/VR hardware sales, as it is hard to argue that AR/VR headsets are essential items. Supply chain disruption (supplier, manufacturer, distribution, wholesale, retail) looks to have had an impact on specific companies’ AR/VR hardware supply chains in the short-term, despite other companies appearing to ramp up production during the crisis. And while recession/depression economic impacts might not have had a negative effect on short-term demand for specific AR/VR hardware sold out in Q1 2020, it is important to monitor whether or not this becomes a bigger factor as the year progresses.

Digi-Capital’s existing forecasts for AR/VR hardware sales were relatively conservative for 2020/2021 already, with an uptick forecast if and when Apple launches smartphone tethered smartglasses by late 2022 (as discussed previously, only Tim Cook and his inner circle really know the answer to that question). Yet there still appear to be significant negative implications for AR/VR hardware sales in the short-term. As both the course of the crisis and supply chain normalization are hard to determine at this stage, Digi-Capital is taking a negative position short-term and a neutral-stance medium-term on the impact of the crisis on AR/VR hardware sales.

Physical lockdowns and bricks-and-mortar retail closures look like a catalyst for ecommerce sales in general, and AR/VR in particular. Mobile AR enabled ecommerce also looks like it could become a primary beneficiary, due to the high active installed base of mobile AR and the ability to virtually showroom products using mobile AR at home during lockdown. This makes mobile AR ecommerce’s ability to increase customer propensity to buy by up to 11-fold look like a potential force multiplier. Yet the data on ecommerce impacts from COVID-19 have sh

own mixed results, so any uplift could be limited. Essential ecommerce delivery limitations (where applicable) could put a dent in eCommerce companies’ ability to capitalize on the opportunity. This could have a stronger impact if ecommerce categories like home furnishings and decoration (a leading category for mobile AR ecommerce) are deemed non-essential. Similarly, supply chain disruption (supplier, manufacturer, distribution, wholesale, retail) could limit the range and volume of products for sale. Last, but by no means least, the economic impact of a recession or depression could have a negative impact on consumer and enterprise confidence and demand for eCommerce sales more broadly.

With countervailing factors in play, Digi-Capital is taking a broadly neutral position on AR/VR ecommerce sales in the short- to medium-term.

Where to from here?

The long-term future of AR/VR could still be bright, but the market was already in a transitional period before the COVID-19 crisis. It looks like the market might shake out over the next two years without an imminent catalyst for high growth, before Apple potentially launches smartphone tethered smartglasses in late 2022 (again depending on Tim Cook and friends).

As a result of the factors discussed above, Digi-Capital’s 2020 and 2021 full-year forecasts have each seen reductions in the $1.5 billion to $2 billion range compared to pre-COVID-19 levels. It’s worth noting that growth for the total AR/VR market remains forecast for both this year and next year, but at a slower rate than anticipated pre-crisis.

In the long-term we’re still looking at a potential $65 billion market by 2024 after the crisis has ended, but that version of AR/VR won’t be the finished article. This might take a lightweight pair of standalone smartglasses, capable of replacing your iPhone at the same price. There are formidable technical and content challenges to reach that vision of AR/VR, and there’s the short and medium-term market to navigate first. Let’s hope that as many folks as possible make it safely through the crisis, to rebuild and move forward on the other side.

What does all of this mean for augmented reality? 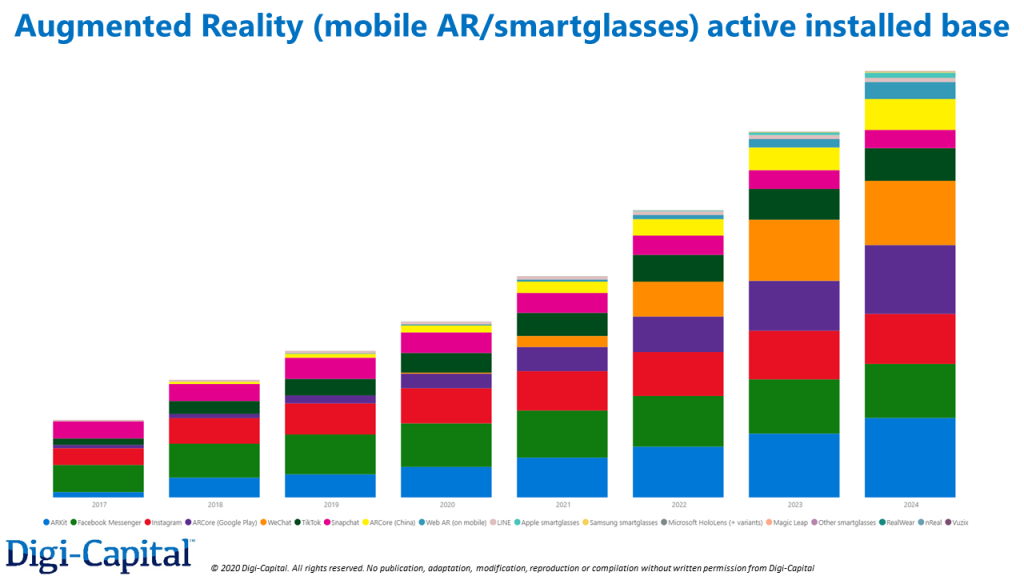 Image Credit: Digi-Capital The augmented reality market could still grow from an active installed base approaching 900 million and over $8 billion revenue in 2019, to an augmented reality forecast over two and a half-billion active installed base and nearly $60 billion revenue by 2024. This is despite short to medium-term negative impacts from COVID-19.

Smartphone tethered consumer smartglasses’ installed base could be in the low tens of millions of units by 2024 (if Apple launches in late 2022, so lower if it doesn’t). At the same time, the enterprise smartglasses market could remain in the hundreds of thousands of units through 2021, not reaching millions of units until 2024.